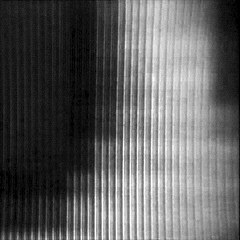 “Achronie—the inability to perceive the phenomenon of passing time—started in 2001 as an experimental audio/video collaboration between Hanns Holger Rutz (music) and Cem Akkan (image). Completed in August 2002, the work consists of twelve short clips and three interludes that explore the interaction between floating and vibrating visual shapes and synchronised sound scapes. While in most cases sound creation followed video, finally a careful balance was found in which the question of stimulus and response or causality arises. The way we look at the images influences the way we hear the noises and vice versa.

More specifically, the clips deal with paradox situations of speed and time perception. A dynamic system in which the recipient can synchronize himself/herself to the stream and, on a different point on the time line, divorce from it. The moment when speed exceeds a threshold and gets mapped back to a state of calmness.”

Originally authored as a CD-ROM using Director, the pieces have been remastered in 2004 for DVD-Video. The portfolio material is rather low image quality mp4.